What do we know about the politics of the new Fed nominees?

On Friday, we learned that the White House is nominating three people to the Federal Reserve Board of Governors.

WSJ: White House about to nominate Fischer, Brainard, Powell to Fed board. http://t.co/wwEdUZWuAX

Zachary Goldfarb described the qualifications of each in The Washington Post:

As governor of Israel’s central bank, Fischer was credited with keeping the country’s economy stable through the global financial crisis of 2007 through 2009. He has also spent time as a senior official at the International Monetary Fund and the World Bank and worked in the private sector at Citigroup. He was a longtime professor at MIT, where he taught Bernanke and many other top economists.

Brainard spent about four years as Treasury’s undersecretary for international affairs, its top official focused on global economic and financial policy. In that role, she helped manage the U.S. response to the sovereign debt crisis in Europe and economic affairs with China and other key countries. She also worked at the Brookings Institution and in the Clinton administration. She was a professor at MIT early in her career.

Powell joined the Fed in 2012 after a career that included time as a lawyer, an investment banker and a top Treasury official in George H.W. Bush’s administration. He also was a scholar at the Bipartisan Policy Center.

To probe their backgrounds a bit further, I decided to look into their campaign contributions. This inquiry produced some clear results: Brainard is a Democratic loyalist, Powell a staunch Republican, and Fisher not displaying any political activity, at least in this realm. The table below summarizes the three individuals’ history of campaign contributions (1989 through today).

While Powell gave more overall (both in amount and frequency) than Brainard, his spending habits suggest that he is actually less of his partisan than Brainard. In other words, Brainard is a more liberal Democrat than Powell is a conservative Republican. I determined in two steps.

First, I computed a weighted average of all their contributions (show in the table at the bottom of this post) relative to the ideology of the recipient. This latter measure comes from Adam Bonica's Database on Ideology, Money in Politics, and Elections. In that database, Bonica maps all political candidates (and committees) that have run for public office since 1979 on a one-dimensional left-right continuum.* The most liberal candidates receive the lowest (most negative) scores and the most conservative receive the highest scores (most positive).  So if Brainard have given to some Republican candidates her “Contributor CF Score” of -1.18538 would have been closer to zero, just as Powell’s would be closer to zero if he had given to more Democratic candidates.

The second step in my analysis was to compare the Powell and Brainard’s CF scores to the universe of political candidates in Bonica’s database. This simple comparison shows that Brainard is more liberal than 84.2% of Democratic candidates running for public office, while

*For more on how Bonica did this, check out his paper. 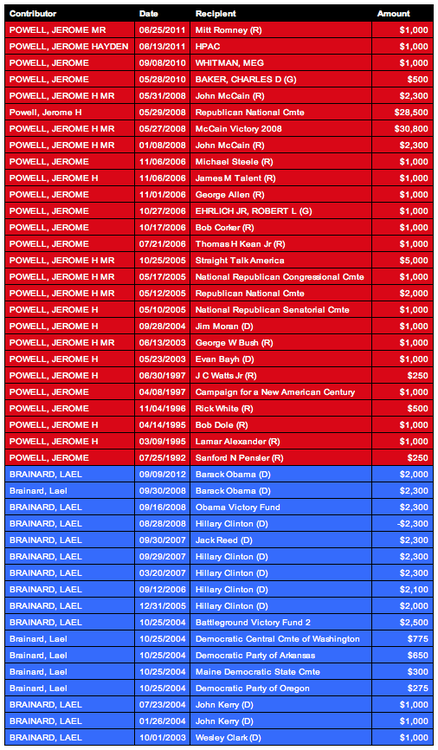 If confirmed by the Senate, they could stick around for a while: