What Can Finance Tell Us About Auburn's Road to Pasadena?

There’s no way around it: Auburn’s journey to tonight’s game was unbelievable. Even the most optimistic Tiger fans weren’t expecting to make it to Pasadena this year. But here we are, only a few hours away from Gus Malzahn leading his team into the Rose Bowl with the National Title on the line.

Given the crazy series of events that lead to today, the question I’ve been asking myself is when did people finally start realizing that Auburn was this year’s team of destiny? The “Prayer at Jordan-Hare” was about as miraculous as any fourth quarter heave in recent college football history, but that merely kept the hope of Pasadena alive and set up the biggest Iron Bowl ever. Of course, we all know how that transpired, but, again, even after “Kick Bama Kick,” Auburn still needed to take down a tough Mizzou team in the Georgia Dome and pray for a Michigan State upset of Ohio State in the B1G Championship game.

On December 7, the stars aligned yet again for the Tigers and both remaining pieces of the puzzle went Auburn’s way, setting up today’s matchup with Florida State.

So let’s return to my question: which piece of the puzzle was the one that convinced the world that Auburn would be here today? One way to answer this would be to examine bets coming into Vegas on whether Auburn would make it to Pasadena and see where the surge is. Unfortunately, I’m not a bookie and thus don’t have access to such data (if you are and would like to share, please let me know!). However, there is an alternative data source that can offer basically the same insights.

TeamTix is a company that offers fans the right to reserve face-value tickets to bowl games (among other sporting events) if their team makes it to that game. Those in finance refer to this as a forward market: you pay today for the delivery of an asset tomorrow. In this case, that asset is just a reservation to buy tickets to see your team play in the big game.  Of course, that asset may be worth a lot if the team makes it to the game, but would be worthless if they don’t (making this also similar to a call option).

The price for making these reservations is driven by supply and demand and the mechanics of this forward market are pretty straightforward. Just like you do when trading stocks, you place a bid when you think a team is undervalued (more likely to make the bowl game than their current price reflects) and offer to sell a reservation you hold when you think the team is overvalued (not as likely to make it). The phenomenon produced by everyone doing this at once is that TeamTix prices reflect the “market’s” interpretation of the probabilities of teams making it to the big game. In other words, schools that are seen as very likely to make it, like Alabama prior to the Iron Bowl, have high prices, while schools that aren’t seen as darkhorse candidates have much lower prices. And these prices are fluctuating 24/7. Best of all, TeamTix sends a tweet every time a new purchase is made in their BCS Championship ticket marketplace.

So what are the moments that matter? There are two that induced by far the most movement in the market (see chart below). 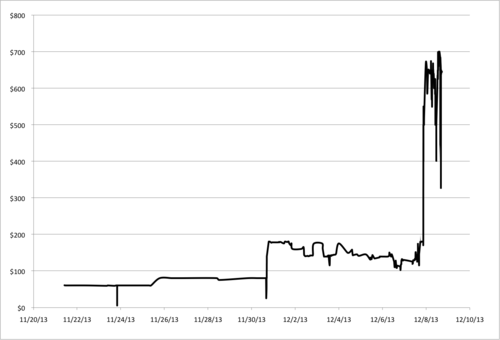 First, on the day of the Tigers upset of Alabama, there were steady purchases of Auburn reservations on the forward market, with prices hovering around $80. Just literally one minute after Chris Davis ran 109 yards (i.e. 7:26 pm EST), purchases for Auburn tickets came flying in. 16 new orders were made within 10 minutes, pushing prices up to $140 and going up to $180 by 10 pm that night.

From here, things were pretty calm on the Auburn ticket market, with prices actually falling over the next week (they hit of low of $102 on Friday night). Presumably, this can be attributed to Auburn fans (and speculators) realizing that an appearance in the title game hinged on Urban Meyer’s Buckeyes losing to Michigan State, an outcome many saw as unlikely.

On the day of the SEC Championship, the forward market for Auburn tickets saw a steady slew of orders, but prices remained fairly stable, climbing only to $5 to $133 before kickoff. They stayed here for much of the game and didn’t really start rising substantially until the game was called at 8:06 pm EST. Over sixty orders came in over that hour and prices rose up to $180. Of course, though the real action was still to come, as the OSU-MSU game wouldn’t finish for a few more hours.

After Connor Cook’s 9-yard touchdown pass to Josiah Price gave MSU a 27-24 lead with 11:41 to go in the fourth quarter, action started again in the TeamTix marketplace. Still, prices didn’t change much until 8:40 PM, when the Spartan D stopped Braxton Miller on 4th-and-2. By the time Jeremy Langford ran in the game-sealing 26-yard touchdown, the price to reserve tickets to see Auburn play for the BCS title had soared to $480. Between the conclusion of the game just before midnight and the BCS’ announcement that Auburn had officially made it to Pasadena, 137 orders came in, with prices peaking at $700 that afternoon.

The fat lady had sung and now fans were finally ready to put down their money on the upstart Auburn Tigers. We’ll find out tonight if that was money well spent.