Who do you think will win the Nobel Prize in Economics?

On Monday, the Nobel committee will announce who will be awarded their Prize in Economic Sciences. The winner will get a medal, a personal diploma, and a cash prize (8 million Swedish Krona or ~$1.2 million). 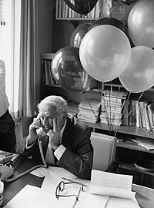 Fun fact: Franco Modigliani used some of his $225,000 Nobel Prize money to upgrade his laser-class sailboat.

So who are the front-runners? According to British betting house Paddy Power, the favorite (at 4/1 odds) is Yale housing and financial economist Robert Schiller. Tied for second at 5/1 are Harvard macroeconomist Robert Barro, LSE econometrician Anthony Atkinson, and NYU development economist Paul Romer. Here’s the full set of odds:

While whoever wins this award will no doubt have a career defining moment when they receive the phone call, it doesn’t actually mean their reputation in the field will change that much. According to research by Samuel Bjork, Avner Offer, and Gabriel Söderberg in Scientometrics, winning the Nobel provides a small boost to citations in the short-run, but then citations begin to decline. As The Economist explains, "people tend to win Nobel prizes when their career has nearly reached its peak. The Swedish Academy, which makes the award, plays it safe.“

Anyways, I’m looking forward to finding out who wins!