Every since the shutdown began at midnight on Monday, pundits of every shape, size, and color have pointed out that there’s a silver bullet: allowing a vote on a clean continuing resolution (CR) would refund the government and “everything would return to normal.”  After all, there have been 20 relatively moderate Republicans (listed here) who have publicly supported the passage of a clean CR. Combine these votes with 200 from the members of the House Democratic caucus and the numbers are looking really good for those, like me, supporting the end of the shutdown.

However, just because a clean CR would pass if it got to the floor does not mean it will get there. That’s because Speaker Boehner has invoked the Hastert Rule, thereby giving him the sole power to decide what gets on the agenda and he has every incentive to hold onto that, preventing a vote that he won’t support. Still, there is a way around Boehner’s control of the floor: the discharge petition. News that Pelosi and the House Democrats are seeking to use this instrument threw the Twittersphere into a tizzy on Friday.

House Dems may have found a way to use a discharge petition to bring a clean CR to a vote: http://t.co/yYe8CtW9w8

While this is a promising (if unsurprising) development, it doesn’t mean that government employees should get ready to return to work. This is true for two reasons.

The first is that the discharge petition is designed to be slow. And I mean really slow. GW political scientist Sarah Binder explains:

Time lags built into the discharge rule are bound to frustrate lawmakers if they seek to open a shuttered government.   Even if an aspiring lawmaker bones up on the House rule book and today introduces a CR and a discharge motion to dislodge it, the earliest the motion to discharge would make its way onto the discharge calendar after securing 218 signatures would be November.  (I am assuming that the House’s calendar and legislative days run roughly in tandem this month).  If the motion doesn’t make it onto the calendar until after the second Monday of the month, the bill would be discharged at the earliest in late November.  Procedural details make the discharge rule ill-suited for swift enactment of a clean CR.

The second reason is that it’s costly for centrist Republicans to add their names to the petition (for more on this, read Molly Jackman’s blog post and Brookings white paper). The point here is simple: a moderate Republican signing onto the discharge petition would, to put it bluntly, really piss off Boehner. So the next time that legislator was trying to get her pet bill or amendment passed, she may not find a supportive audience in the Speaker’s office. Thus, these legislators have to decide which is more important for them: pleasing their centrist constituents who want the shutdown to end or maintaining a positive working relationship with the party leadership, a necessary component for future legislative success.

If these middle-of-the-road Republicans had a really short time horizon and were facing a general election opponent tomorrow, they’d probably side with Pelosi and the shutdown would end. Of course, we’re still pretty far away from that (and for many, the more pressing electoral concern is fending off primary challengers) so these officials aren’t all likely going to blow their political capital on ending the shutdown.

That leads to a final question: what would have to change for the discharge petition to succeed? Another way of putting this is at point does continuing the shutdown becoming costlier for the “swing legislators” (the moderate Republicans) than defecting from Speaker Boehner (assuming his stance doesn’t evolve). This decision-making calculus is illustrated in the figure below. 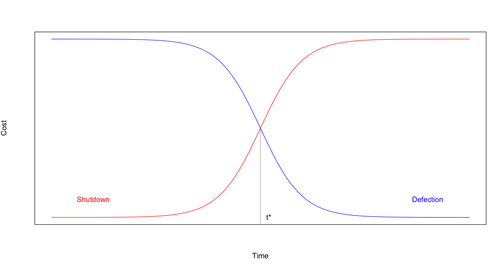 The red curve illustrates the costs of continuing the shutdown. While many individuals in these key districts are already severely adversely affected, what really matters is the pain that the median voter there is facing. Surely, the “average” person in, say, Republican Congressman Devin Nunes’ 22nd district of California is annoyed with this state of affairs, but probably isn’t overwhelmingly personally affected. However, as the shutdown continues, they’re likely to face some increasing inconvenience (e.g. canceling their annual backpacking trip to Yosemite) or direct cost (they can’t purchase federal crop insurance). Thus, the costs begin to rise exponentially, though they are bounded at some upper level.

At the same time, the costs to the moderate Republicans of signing onto the discharge petition drops considerably over time (the blue curve). There are two reasons for this. First, it is easier to defect as the shutdown becomes even more unpopular and Speaker Boehner’s power in the halls of Congress wanes. Second, as more fellow Republicans defect, it is easier for you to defect. Think of this as a tipping point: being the first Republican to sign onto Pelosi’s discharge petition is pretty risky since you don’t always know if others will follow (you probably don’t want to be the first to stick your neck out), but being the 18th is much less so. After all, there are strength in numbers when making a politically risky move.

Ultimately, at some point, t*, in the figure, the blue and red curves intersect and that is when the shutdown will end. It will be simply too costly for the swing legislators to not sign onto the discharge petition at that point. Let’s hope that we reach that point sooner rather than later.