Big news in the past 24 hours

You’ve probably already heard about all of this, but it’s still worth discussing. The news cycle has been pretty momentous for social issues over the last 24 hours. Here’s a quick recap:

1. Wendy Davis spent 13 hours yesterday successfully filibustering an anti-abortion bill in the Texas State Senate that would have closed almost all of the clinics in the state that offer abortions. This isn’t the first time Davis has fought her Republican counterparts. In 2011, she forced Gov. Perry to call a special session to pass the budget after her 76-minute filibuster protesting cuts to spending on public education. Davis also has an inspiring story, going from a single teenage mom to a graduate of Harvard Law (see video below). She could now be primed for state-wide or national office soon. After all, state Democratic Chairman Gilberto Hinojosa called her “one of our top superstars in Texas.”

2. The Supreme Court struck down section 3 of the Defense of Marriage Act. This means that homosexual married couples are subject to equal protection under the law. This means that the federal government will now recognize same-sex marriages celebrated in states in which it is legal. As of today, this includes 12 states (Massachusetts, Connecticut, Iowa, Vermont, New Hampshire, New York, Maine, Washington, Delaware, Maryland, Rhode Island, Minnesota) as well as DC and 5 tribal areas. We’ll also soon be able to add California to that last list (more on this below), which brings me to my next point…

3. The SCOTUS issued a narrow ruling in the Prop 8 case (Hollingsworth et al. v. Perry et al.). Writing for the 5-justice majority, Chief Justice Roberts declared that the the defenders of my state’s ban on same-sex marriages did not have standing in court. That is, since neither Gov. Brown nor Attorney General Kamala Harris refused to defend the measure, no one could. Bob Egelko of the San Francisco Chronicle describes the implication of the ruling:

By finding that the sponsors lacked standing to appeal the rulings, the high court reinstated an August 2010 decision by then-Chief U.S. District Judge Vaughn Walker of San Francisco that the California measure was an irrational act of discrimination based on sexual orientation and gender.

These two rulings were a bit surprising to me since the court’s other decisions this week were of a more conservative bent, especially the invalidation of the key part of the Voting Rights Act. The court has also become much more conservative since Sandra Day O'Connor’s retirement in 2005. According to the Martin-Quinn scores that track the ideology of the Supreme Court, the institution’s current median justice, Anthony Kennedy, is more conservative (higher score) than any on record. 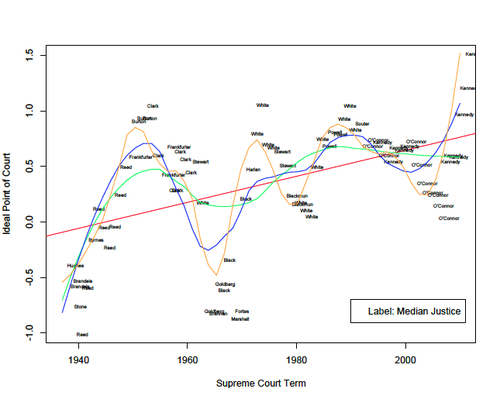 However, at least for now (and for once), the US is on the forefront of progress in the fight for marriage equality. This is especially true when comparing marriage policy in the states to that of our peers across the world. Gay marriage is only allowed in 14 other countries and homosexuality is actually criminalized in 76 others.

Despite this progress, it is important to remember that the fight for true equality isn’t over. We’re going to need more impassioned fighters, like Wendy Davis, to finally end LGBT discrimination in our country. As Macklemore and Ryan Lewis put it, “a certificate on paper isn’t gonna solve it all, but it’s a damn good place to start.”