How Extensive is Corruption in China?

According to a recent report by Deutsche Bank, Chinese political elites have amassed enormous wealth. The implication is that this wealth is not the result of these politicians having had “pulled themselves up by their own bootstraps.” Rather, they seem to have exploited their political connections to enrich themselves.  Thus, some financial analysts have predicted that this corruption will ultimately lead to economic collapse in China. 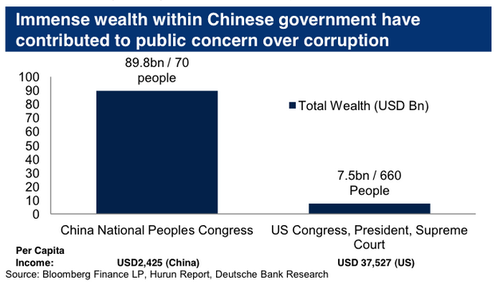 However, maybe we shouldn’t be that concerned since the current level of corruption in China since new empirical evidence suggests that it actually on par with corruption of the US during earlier periods. Here’s a summary of the findings of Carlos Ramirez, an economist at George Mason University:

The comparison indicates that corruption in the U.S. in the early 1870s — when it’s real income per capita was about $2,800 (in 2005 dollars) — was 7 to 9 times higher than China’s corruption level in 1996, the corresponding year in terms of income per capita. By the time the U.S. reached $7,500 in 1928 — approximately equivalent to China’s real income per capita in 2009 — corruption was similar in both countries. The findings imply that, while corruption in China is an issue that merits attention, it is not at alarmingly high levels, compared to the U.S. historical experience. The paper further argues that the corruption and development experiences of both the U.S. and China appear to be consistent with the “life-cycle” theory of corruption — rising at the early stages of development, and declining after modernization has taken place. Hence, as China continues its development process, corruption will likely decline.

What do you think?